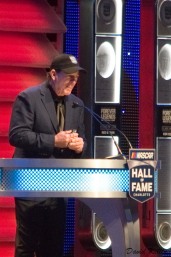 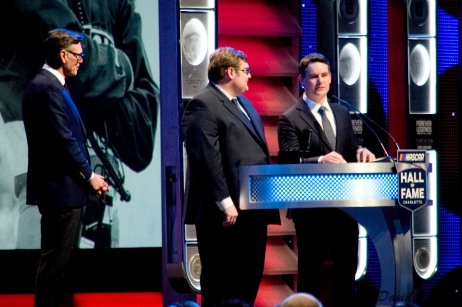 Ray Evernham of Hazlet, New Jersey served as Crew Chief for Jeff Gordan from 1989 to 1999. He was a team owner from 2000-2007. He had 47 victories as Crew Chief and 13 as team owner. Evernham had 116 top 5s, 140 top 10s, and 30 poles as Crew Chief. He had 66 top 5s,  123 top tens and 23 poles as team owner. He was influential in developing the concept of a team approach to pitstops and reduced the length of the pitstop from 20 seconds to 15 seconds. “I stand here tonight before you very humble, very thankful, and very grateful to be a member of the NASCAR Hall of Fame,” Evernham said. “Martin Luther King said that if a man is called to be a street sweeper, he should sweep the streets as Michaelangelo painted or as Beethoven composed music. He should sweep the street so well that the host of heaven and earth will pause to say, there goes a great sweet sweeper. And I read that quote a long time ago, and I realized the best way I could pay back everyone who believed in me was to work hard and be a good street sweeper.”

Ron Hornaday Jr. from Palmdale California has won four NASCAR Camping World Truck Series Championships in 1996, 1998, 2007, and 2008. He has the most Camping World Truck Series victories with 51 out 360 races.  He is the first Truck driver to win five consecutive races in 2009. He competed in NASCAR from 1995 to 2014. “This is for every short track racer that ever had a dream, ever had a heart, ever believed in anything that you can believe in, this is it … the Hall of Fame,” Hornaday said. 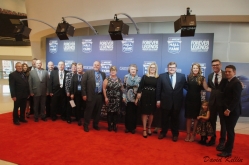 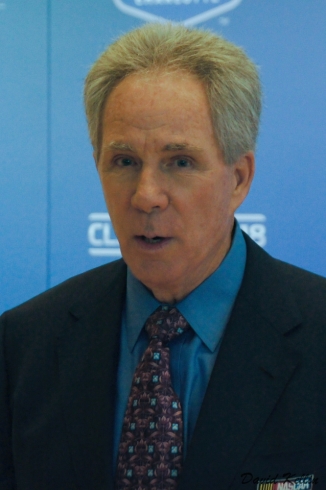 Ken Squier was honored for much more than is role as race announcer. He is credited with helping to co-found the Motor Racing Network. He added the nickname “The Great American Race” to describe the Daytona 500. He founded Thunder Road International Speedbowl in 1960. Squier was the announcer for the first flag to flag coverage of the Daytona 500 on CBS in 1979. He is the first and only Broadcaster inducted to the hall of fame. “In our sport, there are innovators, builders, advocates, challengers, heroes, and an announcer now and then, who all have a part to play,” Squier said. “This is always a thank you time speech, so many to deal with. Some of us are inconceivably lucky to call these folks friends.  I think we all call them heroes.  And I’m feeling like an odd duck in a flock of fancy geese, let me tell you.”

Team owner Robert Yates from Charlotte, NC. was honored for his advancement of the engine building and finding great talent in Bobby Allison. He was a team owner from 1989 to 2009. Robert died on October 2nd, 2017. Dale Jarrett read Yates acceptance speech at the Hall of Fame induction. As owner, he had 57 victories, 270 top 5s, 433 top 10s, 48 poles and 1155 starts. “I never prayed to win a race, I just prayed for the wisdom to help me make good decisions,” Yates wrote. “My creator didn’t always give me what I asked for, but he gave me more than I deserved.”

Work will begin shortly to select the 2019 slate of nominees for the next class of Hall of Fame members.